The Legend Has a New Look

The Boston Whaler 170 Montauk has always been one of the biggest successes of the American shipyard, which manufactures thousands each season. Year after year, this boat has almost become a symbol, but it was time to update  it and Boston Whaler did not do things only halfway.

Like the 150 from the same family, the 170 Montauk is a true legend. We see this model everywhere around the world and it is often still in service even long after it is sold. However, this was no reason to keep it the same. The American manufacturer decided to completely revamp this model. 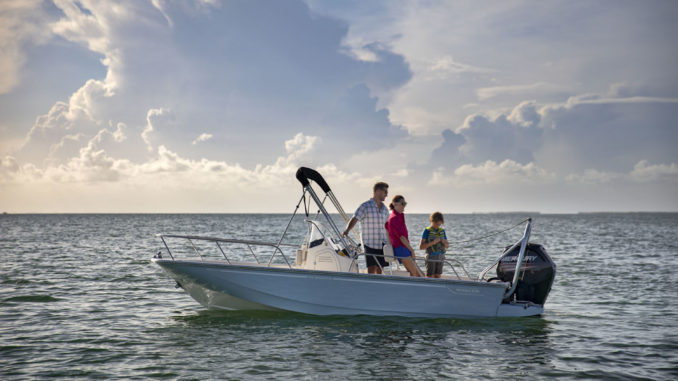 When tackling such a success story, it is always difficult to distinguish between what you want to keep and what needs to be changed. However, it is clear that home engineers have found the right mix. The profile of the new 170 Montauk is very similar to the old model. The length (17’4’’) doesn’t seem change really but the boat is almost 5 inches longer and almost 1 foot wider, real progress in habitability, particularly on the bow. The cockpit is also deeper from 20’’ to 25’’ (at the transom). The freeboard is still low, an advantage on a lake but to use on the sea, you’d better take the “balcony” option. 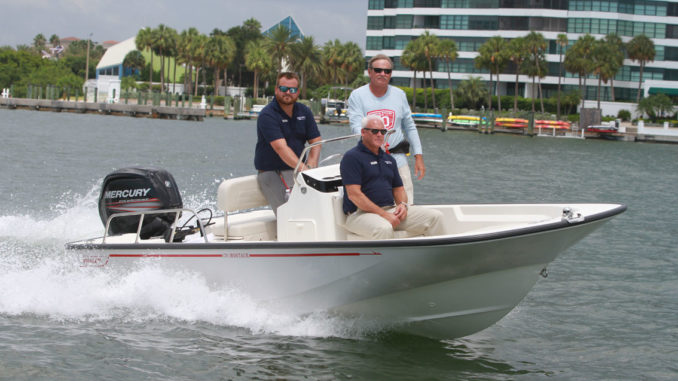 Even if the new 170 seems similar to the old one, the conception is completely new and benefits from the latest technological advances of the shipyard, starting with the construction method, which has the same standards as Outrage, Conquest and Vantage, as long as it is solid. Boston Whaler has also designed the 170 as a whole from the start and the boat does not give the impression of having patches or some adaptations more or less well done.

This can be seen, for example, in the front section, which beautifully integrates an anchor box (with jack) and a large storage box (with jack and gasket) that can occasionally serve as a fish tank. The whole front part can now receive a good size solarium (5’57’’ x 6’23’’) and there are even supports for cups.

It is the same idea on the back with more modularity. Indeed, besides the two small seats, each located above technical storage, you can also opt for two real seats with removable backrests. It’s clever! 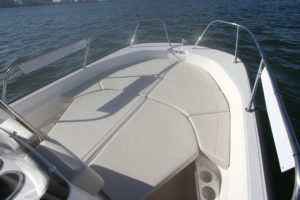 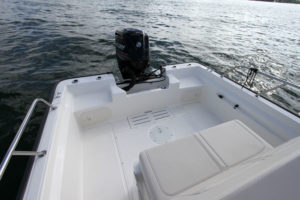 The central part is equipped with a new console that is both compact and functional, including cup holders, a foot release, an upper handrail and a large interior storage area accessible on the port side. There also is enough space to fit a 9 inch electronic screen. This driving position can also be completed by a cooler seat on the front. Finally, the pilot and the copilot benefit from a large bench with reversible backrest that hides a storage, but can also integrate a livewell. 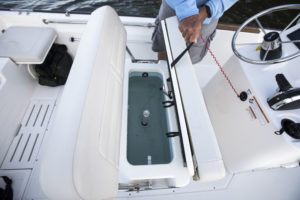 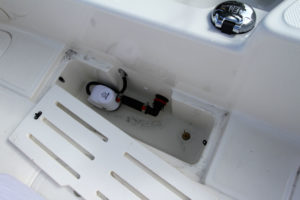 Not surprisingly, the appearance is very good, the building very serious and the hardware is robust. For example, you can find a semi-framed cleat on the front, beautiful navigation lights and many supports for the fishing rods. Of course, the hull is foamed and the weight attests that Boston Whaler did not go to the economy. The equipment is pretty complete for a unit of this size since it even incorporates the tank and if this is not enough, the list of options allows to largely customize the boat by changing the color of the hull or adding a solarium, a livewell, a cooler and even few teak parts. On the other hand, nothing is planned for the table, it’s a pity. 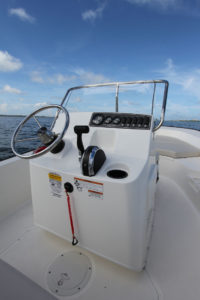 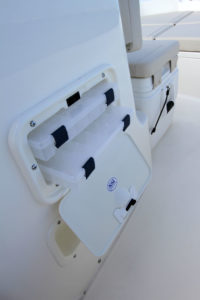 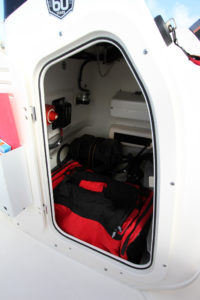 Once on the water, even if it’s only a 17-foot boat, the Montauk is nonetheless a Boston Whaler with the nautical qualities that go with it. Completely new, the hull has a progressive V supported by a large strake and a pronounced bilge that goes down even a little bit to form a mini-gull’s wing. The wide and flatter rear ensures a very good stability when the boat is running and when it is stopped. Thanks to the stern, the passage in the waves are convincing and even comfortable. The boat is mainly offered with two engines, 90 hp or 115 hp, two powers quite logical even if the second has our preference. With 115 hp, the Montauk 170 is lively, quick to plane and, if necessary, it’s able to reach almost 46 mph, not bad for only 17 ft.

In this 2018 version, the 170 Montauk doesn’t lose its soul, but better than this, it gains in modernity, in modularity and it is now able to offer a larger and more family program. On top of that, it takes advantage of the popularity of the brand and a rating that remains high in the second-hand market. It’s difficult to do better in this category.

Suzuki just announced the introduction of a bespoke range of performance propellers for its ultimate four stroke outboards. The new propeller range will be known as Watergrip and will provide Suzuki outboards with the ultimate […]