Things to Remember
The Mako 414 CC is the largest model of the brand. It also offers versatility, an attractive price and very good performance.

Presenting the 414 CC, Mako has really stepped it up into the big leagues with the biggest boat ever produced by the builder. The 414 CC is a fishing boat with impressive measurements and an ambitious program.

Over the last two to three years, the US market has been increasingly turning to open and fishing boats over 40 feet long and strongly powered. A trend already followed by many brands and now by Mako, one of the references about fast hulls offshore fishing dedicated. 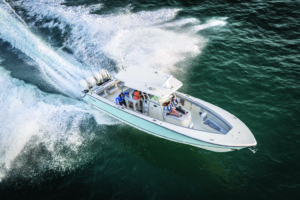 As the brand celebrates its 50th anniversary, it is taking the opportunity to unveil its new flagship, the 414 CC. With 12.49 meters, 3.39 meters wide and four engines of 350 hp, difficult to miss this boat even on the Miami Boat Show pontoons. The Mako offers a look very similar to the other models of the brand with a very slender line, a front part pretty high to protect the crew, an important gunwale and a large console in the center. Moreover, all the elements have grown in a proportional way, which in the end provides a well-balanced profile. The T-Top, beautifully crafted, adds a finishing touch just as the good size anchor to post.

However, after this first glance, the 414 CC comes in another look. Indeed, far from being a big fishing, Mako also follows the trend by proposing a boat that will also be able to accommodate families, a versatility that is found throughout the boat. 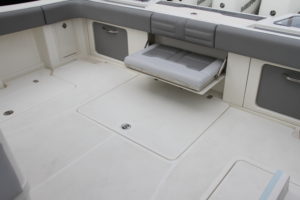 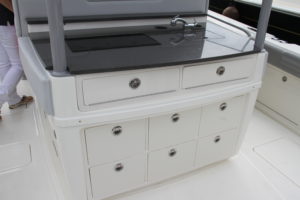 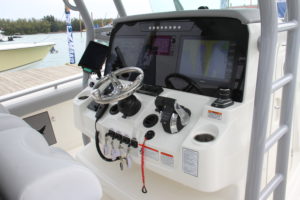 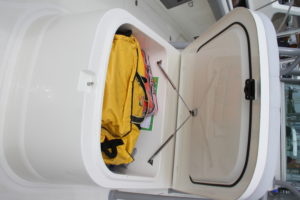 The front part offers two large lateral chests surmounted by cushions and foldable backrests allowing for two front meridians but it is a shame that the hoods don’t have a system to keep them open. In the center, it is possible to have a table and the whole space can be transformed into a solarium. Conversely, the manufacturer has kept a large space up to the bow with an opening to access the chain. Good point again about the cushion on the freeboard. To lean in is rather smart. The floor also hides a large storage box while on the front of the console, a wide lounge chair with armrests and cupholders allows you to relax. Finally, the front part also includes a good-sized chest with a nice finish.

Thanks to large passages and a strong freeboard, the traffic to the rear is easy and in the planking, the manufacturer has inserted the supports for the rods and some chests, again, it is smart.

ing seats, two fish tanks and a fish box. There is also a very large floor box, two fish tanks and the famous side door which facilitates access on board, but also the raising of the catch. Finally, there are two additional floor boxes between the console and freeboard. Also dedicated for family use, the 414 CC offers, on the back of the leaning post, a grill, a sink, two storage and no less than six drawers while the refrigerator is accessible to starboard, right beside the storage compartments for the removable swim ladder. 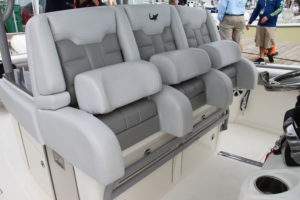 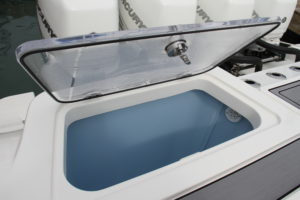 As a fishing boat, the console is perfectly designed. Besides the footrest, the steering wheel and the controls, we face a nice flat surface allowing to fit three wide screens, all protected by a nice windscreen. Good mention again for the three bucket seats with a leaning-post position, a second footrest and two storage boxes, difficult to do better! 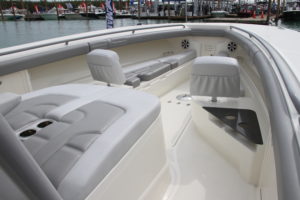 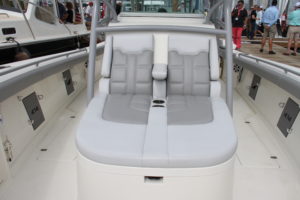 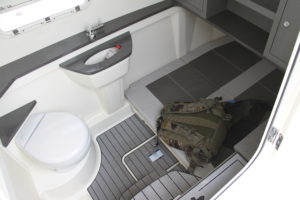 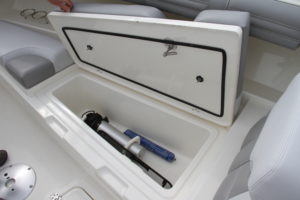 As usual with Mako, the manufacturing quality is simply remarkable as is the level of finish. The boat also gets a complete equipment with T-Top, tanks, cushions, toilets or tanks and if you want to customize your boat, there are a lot of options available. Besides, the 414 CC is available in classic version or in Blue Water Family Edition with a color hull and much more supplied equipment.

Like all other models of the brand, the 414 CC has been designed to face tough conditions and this boat is also designed for longer getaways to fetch tuna or swordfish offshore. To succeed in this mission, the boat uses a deep hull at 24 °, a bench of strakes and a pronounced bilge. The mass distribution is also well thought, which gives the boat flawless balance on the water. Weighing nearly seven tons empty, the Mako logically demands minimum power to run and so the designers allow the boat to support up to … 1,675 hp! During our test, we had to content ourselves with 4 x 350 hp, a power that makes the boat plane in just 4.2 seconds. The cruising speed is around 40 MPH and when you push the throttle a little, you can reach 61 MPH with a hull almost totally insensitive to the waves, it is simply impressive. Despite this power and the measurements of the craft, the 414 CC is still easy to drive and it is also comfortable for the pilot as well as the crew. Moreover, if you want to reach the next level, the shipyard offers the optional Sea Keeper system, a gyroscope that allows the boat to turn while remaining flat. Regarding the power, it’s not really necessary to choose the maximum. With 3 x 350 hp, you should already have a very pleasant boat.

Within the club of the over 40 foot open boats, the Mako certainly has a nice card to play. Less opulent than some competitors, it offers, however, a real versatility and mostly a very attractive price without sacrificing quality. 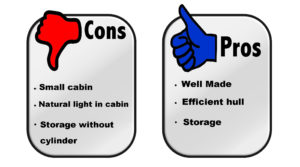 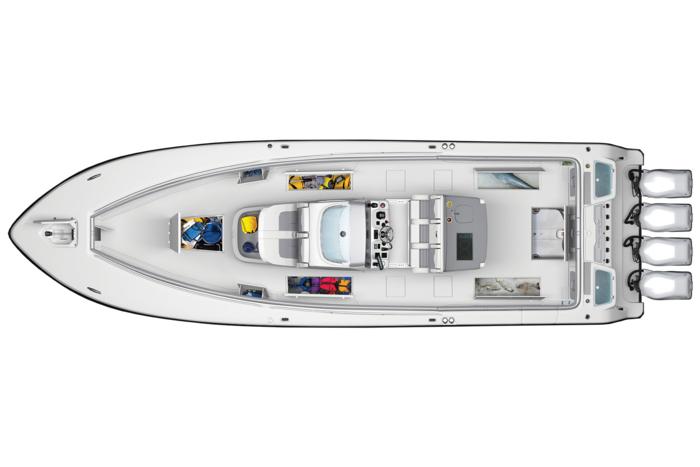 Brunswick Boat Group, has announced plans for the Brunswick Fiberglass Boat Technology Center (BFBTC), the most extensive recreational boat design and technology center in the United States.  Located in Edgewater, Florida, the 45,000 square foot facility will […]

The GEICO Bassmaster Classic presented by DICK’S Sporting Goods is headed to the Tennessee River! The prestigious championship bass tournament — widely known as the “Super Bowl of Bass Fishing” — will be held March […]

XO Boats will introduce its newest boat model in Boot Düsseldorf 2018, XO Explorer.   “XO Explorer is taking XO back to its roots.  It is an uncompromised product of XO’s philosophy, a boat of […]